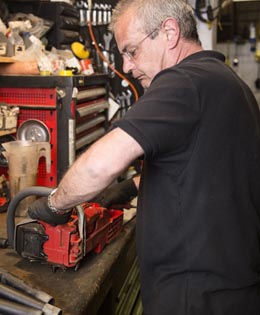 Keith started working at Penrith Tool Hire in February 2014.  Keith is responsible for looking after our hire fleet. He trained as a HGV Driver and Transport Manager.  He has his CPC’s in national and international transport management and his UK & Canadian Class 1 HGV Licence.

Keith decided to apply for this role as he has always enjoyed mechanics and fixing machinery.  Now he gets paid to do what he enjoys!!

His favourite part of the role is the variety of machinery that he gets to work on at Penrith Tool Hire.  Anything from the smallest drill to diggers, dumpers and chippers!

Before starting work at Penrith Tool Hire, Keith spent two years driving long haul trucks across Canada and the USA, although he says he ‘wasn’t an ice road trucker!’  They had several feet of the ‘white stuff’ on the tarmac roads for six months of the year so there was no need to go to the artic circle.  Keith also qualified as a diver on the Great Barrier Reef  (a long time ago!).

This website uses cookies to improve your experience. We'll assume you're ok with this, but you can opt-out if you wish.Accept Read More